“Vision 2040,” 20-Year Economic Plan for the U.S. Virgin Islands, Completed and Released to the Public 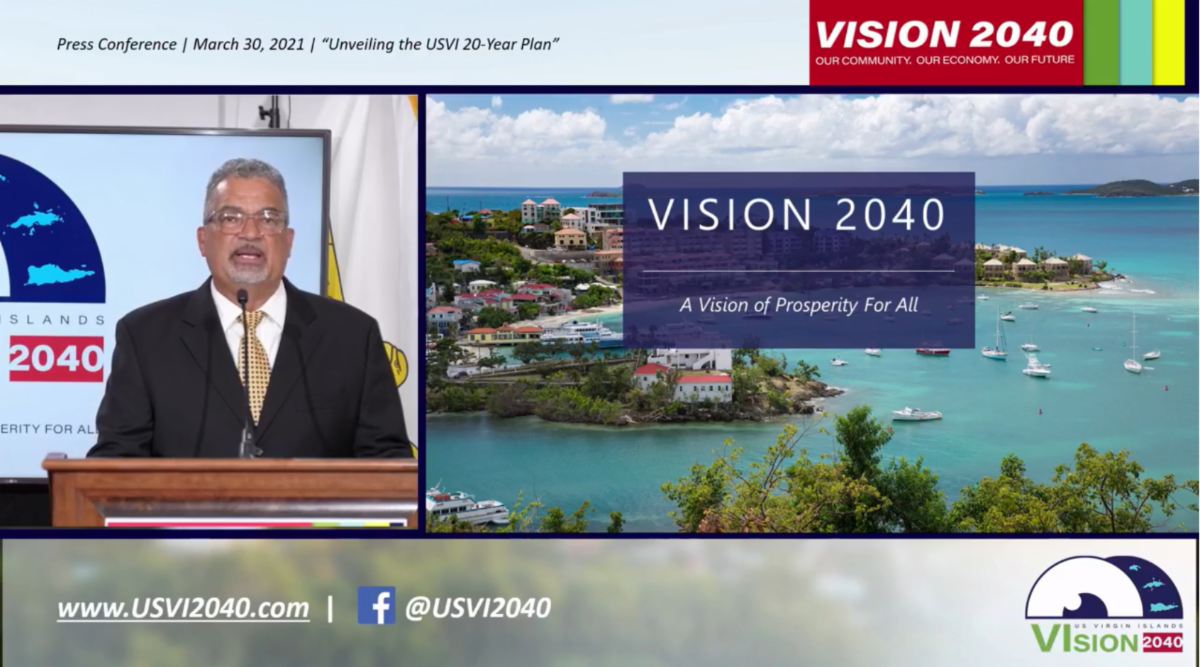 Christiansted, U.S. Virgin Islands – March 31, 2021 — Reach full employment, adding 1100 net new jobs each year between now and 2030. Increase the population by 10 percent from the 2020 census. Raise the share of locally sourced food from three percent to 35 percent. Generate 75 percent of the Territory’s electricity from renewables, up from one percent today.

Those are just a few of the aspirational goals in the completed Vision 2040 plan unveiled yesterday by U.S. Virgin Islands Governor Albert Bryan Jr., VI Economic Development Authority CEO Wayne L. Biggs Jr., and an executive for the consulting team instrumental in the development of the plan.

Formally entitled Vision 2040: Our Community. Our Economy. Our Future – A Vision of Prosperity for All, the 283-page plan casts a vision of economic diversification that substantially grows the economy while reducing the Territory’s dependence on tourism.

At the same time, the tourism sector itself would grow but would involve more “VI Style Tourism,” focusing on extended stays in which visitors experience authentic Virgin Islands features such as its heritage, culture, adventure, and wellness, among others.

Other “aspirational goals” in the plan include a healthcare and health sciences sector that more than doubles from seven percent to 15 percent of the USVI’s gross domestic product, the development of the highest quality education system in the Caribbean including higher education that attracts the best and brightest from both within and outside the territory, and the establishment of the USVI as a Blue Economy research center of Excellence for ocean-based tropical environments.

Deemed by its authors as “the most ambitious long-term economic strategy and action plan ever attempted in the U.S. Virgin Islands”, Vision 2040 is the first-ever 20-year economic plan. The document is the culmination of six months of intensive work by the VI Economic Development Authority (USVIEDA), its allies in other government agencies, the private and non-profit sectors, and Camoin 310, the Saratoga, NY-based economic development consulting firm hired to assist in its creation.

Officially launched last October, a key element in the development of the plan was the engagement of Virgin Islanders, both those who currently live in the Territory and Virgin Islanders who now live elsewhere in the U.S. mainland and abroad.

Some 2,500 residents and more than 700 former residents heeded the call, participating in multiple surveys, one-on-one interviews and virtual town hall meetings in November and December. “The response was phenomenal,” said USVIEDA CEO Biggs. As noted in the plan’s executive summary:

Participants spoke directly about their hopes and dreams, and of those things that they love about living in the U.S. Virgin Islands: the deep sense of community, the natural beauty, friends, family, and more. At the same time they did not sugarcoat the problems of living in the Territory, such as lack of opportunity and family-sustaining jobs, high cost of living, food insecurity, poverty, inadequate health care, and crime.

Eighty-seven percent of businesses surveyed said the business climate is problematic. The report provides recommendations and new initiatives to improve conditions to grow businesses. There is a strong focus in the report on streamlining the regulatory processes, as:

Far more encouraging were the responses by the diaspora, people who grew up with or otherwise spent years in the U.S. Virgin Islands, but now live elsewhere, primarily in the mainland United States.

Some of these former territorial residents had been away for as long as 30 years. But invariably they referred to the Virgin Islands as home, and an astonishing 80 percent of them said that, given the right conditions, they would move back. To the extent that former residents can be considered a “target industry,” USVIEDA CEO Biggs said he plans to build on the momentum of Vision 2040 by continuing to engage the diaspora in the months ahead.

The Vision 2040 plan identifies eight sectors of target industries and economic activities. They are:

The lead consultant for Vision 2040, Dan Gundersen, Principal, Camoin 310, said: “Twenty years from now, the Blue Economy is expected to account for the majority of jobs in the U.S. Virgin Islands. Vision 2040 helps position the Territory and prepare residents for these higher-paying job opportunities.”

USVIEDA CEO Biggs said: “The completion of the 20-year economic plan for the Territory is just the beginning, it is now in the hands of Virgin Islanders in the Territory and the diaspora to bring the aspirational goals of Vision 2040 to fruition for generations to come. The collaborative effort from the public, private, and non-private sector is essential to maintain the momentum to transition to the prosperity of the U.S. Virgin Islands for all Virgin Islanders. My team at the VI Economic Development Authority and I are committed to doing just that.”

Governor Bryan said: “A comprehensive plan for economic development has to include the entire community, and this plan does that. Our administration is making investments in our infrastructure, our workforce, and toward diversifying our fragile economy. A long-term plan such as Vision 2040 gives us a road map for how and what those investments should look like.”

The entire 20 year vision plan can be found at www.usvi2040.com.